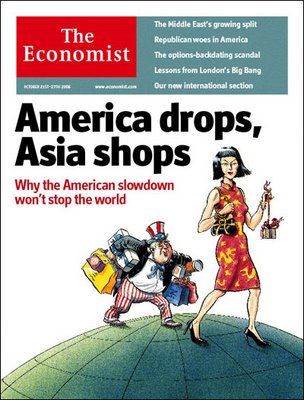 Economist explains nicely what is happening in the economy currently and why the doom and gloom camp is wrong. Last week I was talking to people in India where currently the festival of Diwali is going on and some of the stories I have heard of shopping sprees and consumer behaviour are unbelievable.

Walk in to any India metropolitan city and you will see streets lined with luxury brands like Cartier, Patek Philippe, Rolex, Hermes etc. What are these people buying with their new wealth, foreign cars, electronics, holidays, luxury items. My sister was telling me in the case of some electronics item there is so much demand that shops are only accepting booking with items to be delivered post Diwali. Many of the technology and electronics good they buy are American. In fact goods manufactured or atleast labeled to have originated from Amrica, Europe command better demand than locally manufactured goods. Because it connotes status to have foreign goods.

It is not just consumers shopping, but businesses are on one of the largest expansion spree I have seen in my lifetime. Huge industrial projects are being set up. There is significant investment being made in machinery and plants. Lot of it is imported or bought from American companies.

The reality in economy is always different from what narrowly focused bears make it out to be. That is why they and their followers are sitting on sideline waiting for doom while the market continues to act well.


AMERICAN consumers have been one of the main engines of global growth for the past decade. But now, as America's housing boom threatens to turn into a bust, many forecasters expect household spending to stall. A few even worry that America could come perilously close to a recession in 2007. Previous American downturns have usually dragged the rest of the world economy down, too. Yet this time its fate will depend largely upon whether China and the other Asian economies can decouple from the slowing American locomotive.


According to conventional wisdom, American consumers have single-handedly kept the world economy chugging along, whereas cautious Europeans and Asians have preferred to save. Yet the importance of America's role in global growth is often exaggerated. During the past five years America has accounted for only 13% of global real GDP growth, using purchasing-power parity (PPP) weights.

The real driver of the world economy has been Asia, which has accounted for over half of the world's growth since 2001. Even in current dollar terms, rather than PPP, Asia's 21% contribution to the increase in world GDP exceeded America's 19%. But current dollar figures understate Asia's weight in the world, because in China and other poor countries things like housing and domestic services are much cheaper than in rich countries, so a dollar of spending buys a lot more. If you want to compare consumer spending across countries, it therefore makes more sense to convert local currency spending into dollars using PPPs rather than market exchange rates.

Posted by Pradeep Bonde at 4:48 AM