I was going through the earnings list today and I noticed CALM on it.
http://online.wsj.com/public/resources/documents/digest_earnings.htm

Now this stock I had traded some years back and made me lot of money.
Pull a monthly chart of this stock. Look at it. It went from 8-42
without much of correction in 2003-2004 ( it had a split since then so
the price on graph looks different) 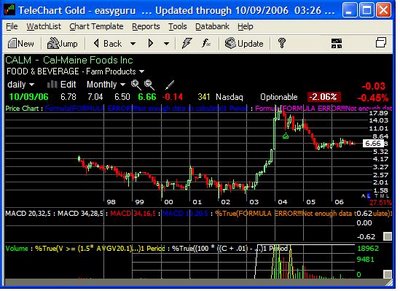 Now what triggered this move in this egg company. Eggs is such a boring
industry, it is not biotechnology or technology industry. Why did this
company make this kind of move. It had been in existence for over 5
years before this move.

See what happened in 3Q 2003 and after that till 4Q, 2004. That
magnitude of earning acceleration immediately leads to price
acceleration.

There were other factors which helped, it was unknown, unheard of stock
with less than 5 institutions holding it. It had a float of only 6.5
million then. It had no analyst coverage. It barely used to trade few
hundred shares a day. It started rallying post earning day and I
entered and it just kept going up as long as it continued to show those
torrid earning growth rates.

Here is a more recent example of TRT. 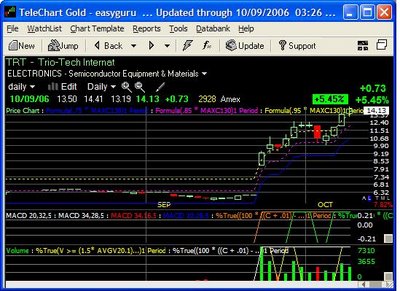 Tomorrow is start of earning season so if you want to make some real
profit keep your eyes wide awake during this season. If you build your
database during the season, you will have lot of opportunities like
this. You have to look for significant earning acceleration like this.

Many times I hear from people earnings do not matter or you can not trade earning. I just shake my head. Sometimes the Fedora falls down ;-) Ignorance is bliss.

Some of my previous about this are here, here and here.
Posted by Pradeep Bonde at 3:35 PM