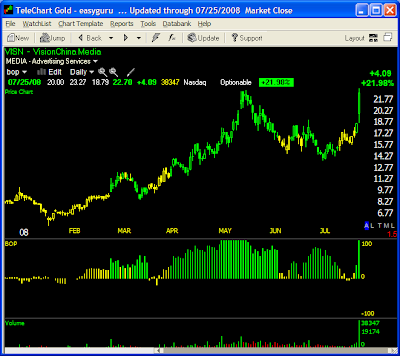 VISN: VisionChina Media Inc. is engaged in operating out-of-home advertising network using real-time mobile digital television broadcasts to deliver content and advertising on mass transportation systems in China based on the number of displays.
Blowout earnings resulted in 21% move on record volume. More gains are ahead for this stock.

The earnings season is in full swing and earnings breakouts continue to show up.

he Alpha magazine has interviews with 14 hedge fund managers.

Posted by Pradeep Bonde at 8:16 AM No comments:

Fund mangers see potential in US market as rest of the world deteriorates as per this Telegraph article.

Fund managers across the world are dumping stocks and retreating to cash in a mood of extreme pessimism, fearing that the looming economic crunch is an even greater threat than inflation.

The latest survey of investors by Merrill Lynch shows that an unprecedented 41pc now think that a world recession is either likely or very likely. The majority dismiss hopes of double-digit earnings growth next year as "fantasy".

"People are a lot more scared about the macro-outlook. The survey has never seen anything like this before since it began a decade ago," said David Bowers, the organiser of the report.

"Recession risk has taken over from inflation risk. Fund managers believe the global economy is deteriorating so fast that a wage-spiral is never going to happen, at least in developed markets," he said. The survey is based on 191 funds managing assets worth $610bn (£305bn).

The US is emerging as the one bright spot in the global gloom, despite the credit mayhem. A net 7pc of investors are overweight in US equities, clearly betting that most of the bad news is already in Wall Street prices. The figure was negative in May.

With the tailwind of 2pc interest rates and a cheap dollar, America stands to benefit from the "first-in, first-out" principle. Others have yet to take their full punishment from the cycle.

"The US has now become the country of cheap manufacturing. You've got 20pc wage inflation in emerging markets so FDI (foreign direct investment) is flowing back there," said Karen Olney, Merrill's chief European equity strategist.

Some value managers are down 40% plus

Catastrophic draw-downs are career ending in this field. Look at some of the famous value managers, they are having upwards of 40% draw-downs this year. The investors in those funds will have to wait years for break-even. Many of these managers will never come back. Their career might be over.

If it's any consolation, the elite billionaires as well as we poor investment peasants have been roughed up by this year's cruel and vicious market. We can offer you that solace, thanks to the efforts of crack researcher Teresa Vozzo, who secured the data from an interesting Website dubbed GuruFocus.com

As its fairly repellent name may give you a hint, GuruFocus tracks the stock picking performance of 55 mostly famous (and usually rich) investors including the likes of Warren Buffett, George Soros, Dave Williams, Glenn Greenberg, Carl Icahn, Ron Baron, David Dreman, Edward Lampert, Bill Miller, Marty Whitman and Seth Klarman. We know a number of these fine gents and even like a few of them.

According to GuruFocus, in the first half of this year, only four of the 55 bought stocks that collectively scored a gain. This lucky quartet was headed by T. Boone Pickens, the oil maven, whose stock purchases in the first half of the year were up a nifty 23%; Ken Heebner, whose equity buys averaged a 14.5% rise; Steve Mandel, who enjoyed a 10.1% average gain on the shares he bought in the opening six months, and David Winters, who posted a 3.8% appreciation.

The worst losers were Marty Whitman, whose first-half picks were down 43.9%; Mohnish Pabrai, whose buys were down an average of 41.9%; and Bill Miller, whose purchases, on average, lost 38.5%. No need, we hazard, to pass the collection plate.

Keeping losses small is the key to long term survival in this game. If you remain solvent and manage your nerves and perspective during bearish periods, then during bullish periods there are always more opportunities than you can handle.

A timing model like Market Monitor keeps you on right side of trend. It has correctly signaled every up or down move so far.
Posted by Pradeep Bonde at 10:07 AM No comments: