Swing trading using momentum burst is a short term trading method that tries to capture slice of a trend or a short term burst move. 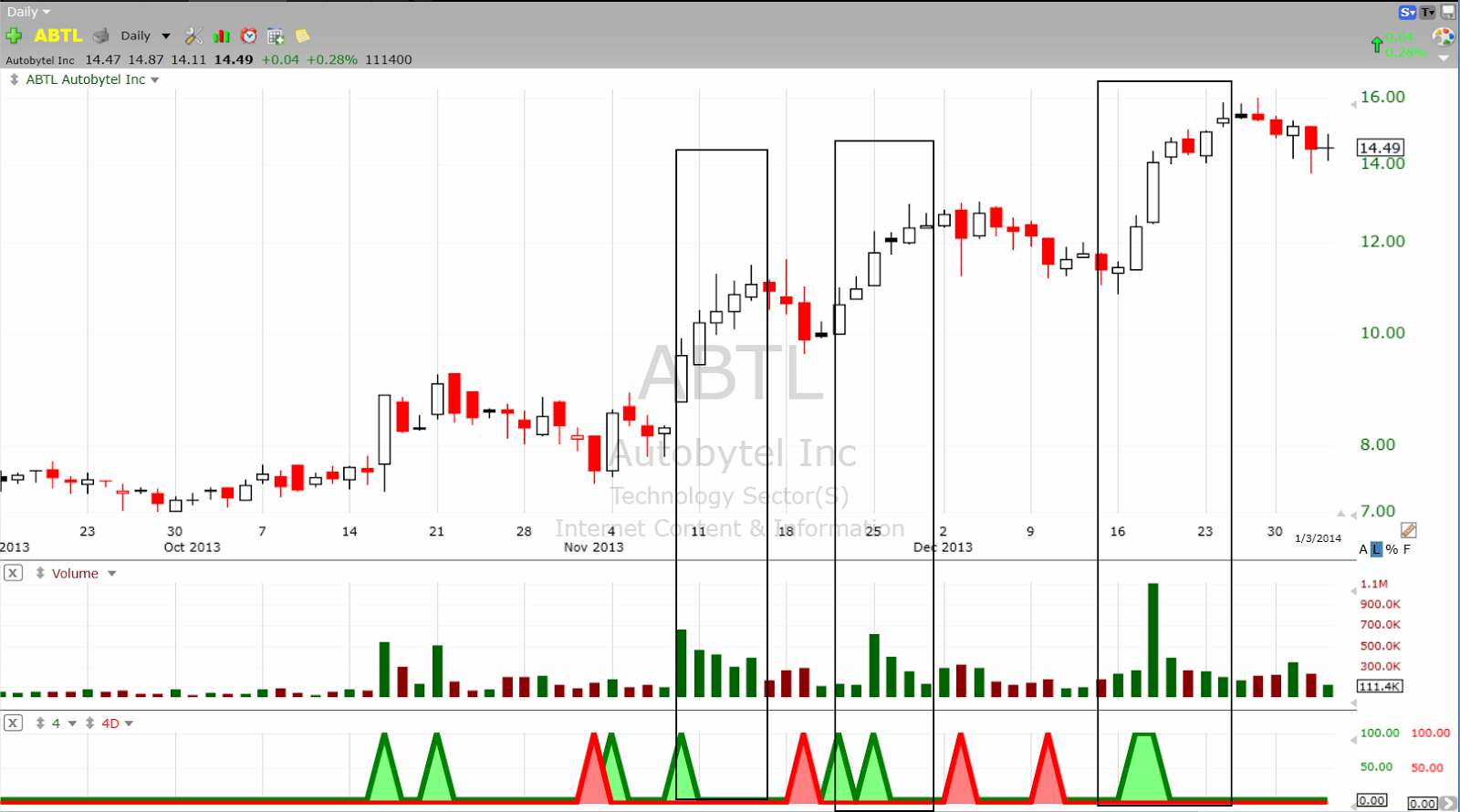 The marked boxes in ABTL indicate the kind of trade we are looking for . It is a 3 to 5 days move. It is of 8 to 40% duration. First day of the move is range expansion move. In this particular example the 4% b/o signals start of the move.

Is a simple scan I have used for over 14 years to find range expansion. The idea behind the scan came in around 1999-2000.

During that period I worked with someone doing finance PhD to look at every 25% plus kind of move in a month or quarter  for 40 years of data using Compustat database.. We looked at what was common in that move. We found almost every one of those moves had one or series of 4% plus move and in majority of the cases those 25% moves started with a 4% range expansion move.

Let us look at the first box on above stock. Move started with 4% breakout. Volume was significantly higher than volume in preceding 8 to 10 days. Prior to breakout day there was a narrow range day.

One of the minor negative on this stock was that it did not close near high. But we have to weigh number of factors together to select a good setup. And also in this case we are looking at this in hindsight. On day of breakout we did not know whether it will work or not.

In this case the first marked box resulted in 31% move in 5 days from the gap open. The second box move was 26% and third box setup was 39%. That is the nature of momentum burst moves in stocks.

This phenomenon of burst moves is not something you will see only in 2013, it has been in existence since market started.

Both approaches work. Only the process flow differs and the profit targets differ. Anticipation requires more work but you get rewarded for that extra effort.

ABTL is just one example of this kind of swing  moves and it is one of the better examples, but these momentum burst moves are minor variation of this basic move.

These kind of momentum bursts are traded based on just setup quality and the trader does not get involved with other aspects of the company like profit, valuation, insider buying , or any other variable.

In a year you will find anywhere between 1000 to 5000 such setups in the market. Practical consideration like your capital and how much you are invested in existing swing trades determine your ability to take all setup. For example currently I am 87% invested that will limit taking a new setup ill one of the existing position gets closed. That might mean letting many good setup go.

What can make you good at trading this setup?

Understanding of the setup logic. Your own discovery mechanism which clearly shows that this kind of setup has historically worked . Your ability to spend hours studying the guidelines I have provided to identify it (or developing your own guidelines after studying over 5000 to 10000 such past setups.

Methods like these can help you make money with very small drawdowns and that is why they have existed for hundreds of years.

Posted by Pradeep Bonde at 8:21 AM

May I trouble you to share why the breakout on 16 Oct 13 was not followed up on? It has appeared to meet your criteria and the preceding days leading up to that appeared more orderly than the first box at 8 Nov 13.

Thanks for your patience, it is much appreciated.

It had gone lower and then revered so stop would have been large, but it can be considered ok setup

Thanks for your insight once again, Pradeep. Appreciate your generous sharing of information, I've learnt more following you than the tomes of books I have read.